I was honoured to be invited back to Boondocks this year – a smaller affair but none the lesser for it, somehow they were able to shrink last years festival into a tiny field in the middle of the beautiful village and not loose any of the classic festival feel! We were slap bang in the centre of everything, nestled behind the sound tent and flanked by catering vans. There was a lovely community spirit and the sun shone for us!

We set up on the morning of Friday 7th…it took us around 3 hours just the two of us to get oo arh! up and running as we had not had a chance to test the new configuration of the sign frame yet but I think you will agree, it looks pretty fantastic! 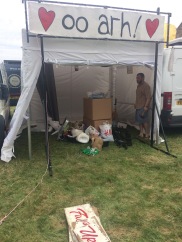 I had more stock this year and so was able to keep some back, ready to replace whenever another item sold which was really nice!

The layout also looks a lot neater now that I have started doing more lines of designs and, possibly for the first time since trading, I have been very satisfied and proud with the look of the stall!

As if last year needed any topping, we actually did better this year, even though the footfall was less and the festival was smaller! And I have to mention some of our lovely and loyal customers (apologies as I am awful with names!)

A local gent, who bought an oo arh! jacket last year, came back and snapped up three shirts, then proceeded to bring his friend back another time later that day and buy him a shirt! Turns out another of their chums came and bought a similar jacket and then told his friends on a Stag Do who all came and purchased shirts too!

It was great seeing people wearing my garments around the festival! Such a buzz! Doesn’t this gent look fab in his oo arh! shirt?! So proud!

A lovely lady came and found four items she fell in love with and two young girls went away with matching scrunchies!

These two are part of a sewing club at school, and will be the leaders next year, they had a good rummage through the stall and were very complimentary…they even got me a gift…really touching and humbling.

Glitter glitter glitter! I also got festivaled up at the Glitter Palace by some really talented ladies to match my Western inspired festival getup – I would recommend them to anyone looking for a slightly different approach to face painting, etc!

After our little test run, we discovered that we really need more light in the stall – it isn’t too bad but it would be nice if people didn’t have to use their torches on their phone to see by! I’ve ordered some more fairy lights because, even if they do not kick out much light, they look so so pretty, and I’ve ordered some camping lamps, so hopefully we will get a nice balance of useful light and ambience.

We received such lovely comments (plenty of oo arh-ing!) and fantastic suggestions for other design ideas and festivals to look into – so a huge thank you to everyone who came and said hello and stayed for a chat, tried items on, found their own unique oo arh! garment to take home, and to those behind Boondocks for having us!

And of course, massive thank you to Alex, ever supportive, ever loving, and ever constant!

Here’s to next year!