I have been to see Gifford Circus a few times now and love the traditional feel they have to their shows – it is like stepping back in time; with simple sets, gorgeous historical and colourful costumes, sweet animals, a live band and a proper story! A brilliant family day out and I would recommend it to everyone!

I found out that they were looking for a team of art students to help them paint their set of this years circus and I applied straight away – it is not strictly costume but it is sort of theatre and, to be honest, I am just desperate to be a part of such an original and exciting project!

So, I pinged them an email before Christmas and am off for an informal interview on Friday 20th Feb!

I went for the quick informal meet at their new base in Stroud and was welcomed and given the opportunity to work with them! The lady I met also said that she would talk to the costume team to see if they need anymore help – I feel I would be more useful there, however, I just want to be a part of it!

I am off to camp at their farm just outside Stroud in mid April and am so excited about the prospect of getting stuck into the creativeness! I have been emailing Lousia and she has kindly offered for me to work between the costume department and the sets and props so I can get a feel for all the different processes and exciting things going on!

I do not want to be a one job kind of worker; I like the idea of being able to turn my hand to many different things, that way I can be more helpful and useful but also get the most out of my time there and learn as many different skills as possible!

Mid April came around very quickly and I enlisted my twin’s help in putting up my tent – Fennell’s Farm is a working farm but also the hubbub of the Gifford scene with building work, costume and rehearsals going on all the time. The Gifford’s were still settling in to their new home, so the farm is a work in progress but it is in a beautiful part of the world with amazing views, especially where we were camping. 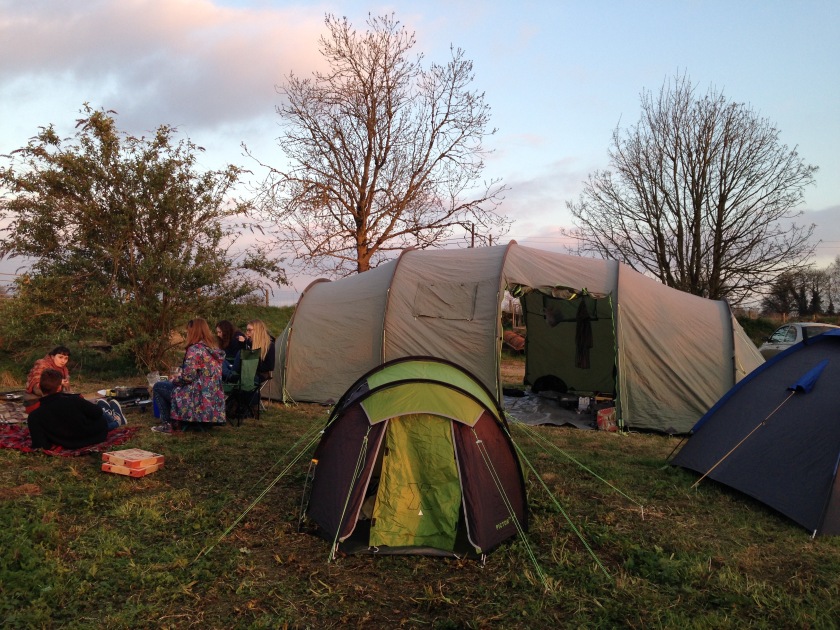 This year the theme and title of the circus is ‘Moonsongs’ – an interesting idea, and completely open ended which gave the creative team plenty to research and develop. In the end they settled on the idea of replicating a Victorian circus or freak show feel…

Here is one of the key references we have been using to create our very own throwback theatre! Everything was to be glittery, sparkly, exciting, theatrical and eye-catching! Apparently this is the first year which set has been used so heavily, and I can see why, because the feel of that age old circus was all about the visually exciting and stimulating.

I felt very lucky to work with such a wide range of people, all doing amazing jobs, all different and all important – the acts were also around for the meal times and in rehearsals, so it was amazing brushing shoulders with the stars of the show!

A typical day at the circus:

1:00-2:00 – Lunch (varied a lot but often baguettes or jacket potatoes which we could fill to our own individual tastes!)

6:00-7:00 – Dinner (which was always different, I never had the same thing twice, plenty of it and the chefs catered for all dietary requirements!)

7:00-? – Down time (I spent a lot of it relaxing and chatting to the others, but once went to a gig outside Stroud!)

Towards the end of my month there it got a bit crazier, what with all the rehearsals and panic to get things finished for 15th May. Long days, but always different and exciting!

So, what kind of stuff did I get up to…?

One of the first things I had to do was to help one of the other girls finish up the seat ends for the walk ways into the circus ring, featuring characters and animals from this year’s show…

ed, painted with this gorgeous turquoise blue, then the images glued on or designs painted and finally varnished three times! So, a long old process but I think you’ll agree that they look fabulous and they will hopefully last the multiple moves the circus does.

A new theme arose, which I do not think Nel, Louisa or Cal had any idea about but the more roses we made, the more they wanted on the set and in the costumes…and I do agree, it draws the whole production together nicely, gives it that handmade feel which Gifford is so renowned for…but my fingers are stiff, sore and tired from all that sewing! They were fairly easy to sew but just very time consuming and tough, since they were mad out of leather, some real and others fake. Notwithstanding this, they look fabulous – used for the first time we see the horses, attired like carousel horses! 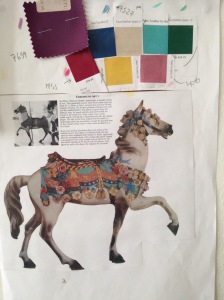 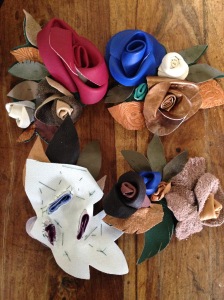 To decorate the entrances of the circus and the audience blocks by grouping a few together with leaves and using them as the drape points on some swags which had a lovely effect as they were made out of similar colours. They spread across parts of the set too – which meant more work but, wow what an effect they had! 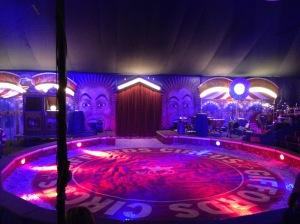 I also helped out doing odd jobs, such as making curtains, adding Velcro to a dummy which needed to be decapitated and separated, adding embellishment to the swags, painting, sanding, priming wood, elongating the black out lining of the tent and other such random jobs which were fun to break up the day and helped me to get a feel of just how much work and prep has to go into each show they do!

to the velcro on the dummy, I was called upon to whip up some trousers for it’s replace costume of Jolly Jack’s (below) which was a fun and quick job, but gave me an injection of costume construction – it was a bit of shock to the system, having to think about how trousers are made after weeks of hand sewing and painting! 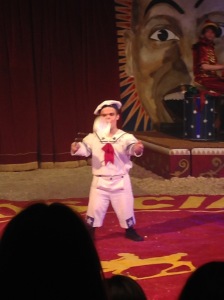 I was also able to have a hand in the costume department as well – they also had roses to make but I was able to help with other alteration jobs as well which was right up my street! It was amazing how comfortable I felt back at a sewing machine with seams, needles and pins in front of me!

Another skill I have learnt from Gifford was how to make curtains…sounds silly but I have never had cause to construct any before so took on the challenge willingly yet confusedly! 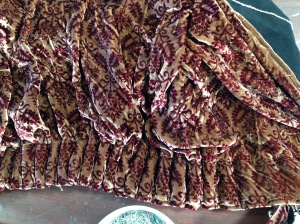 d a curtain all the way round the left hand side, mad out of gorgeous velvet…which I was very proud of when I had finished them, I had a bit of help with the tricks of the trade from one of the other art interns so I got it right! And the booth on the right needed magnetic curtains as they have to be ripped off dramatically at the start of the show; so that was fun to do as well! And to see them used in the performances! There is also a simple black divider curtain between the two booths…so a lot of sewing but I really enjoyed doing it! Oh and the little blue flounce around the bottom of the platform which the booth it stood on….I did them too!

All in all, it was a fab experience and I really feel I have grown in confidence – I always tried my best to do the things they asked of me, if I didn’t understand, I asked and learnt from them. I enjoyed meeting all the amazingly talented people behind the scenes and on the stage, spending time with them and being part of the creative for behind this year’s ‘Moon Songs’…!

See you in the ring! 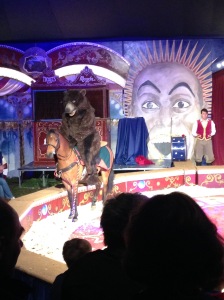 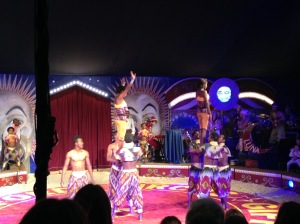 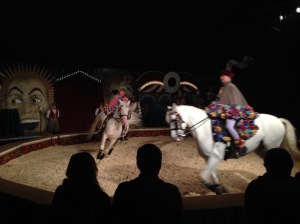 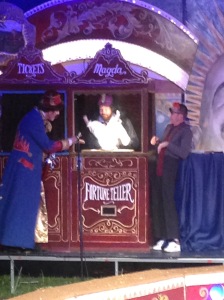 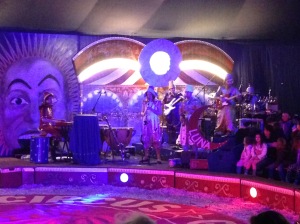 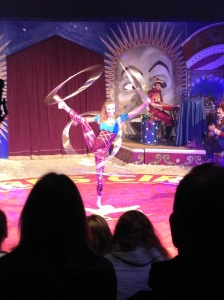 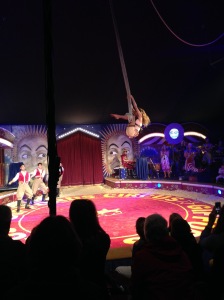