One of my favourite projects we were given was that of Don Juan – we were asked to design two different versions of the play, a modern film using Marber’s ‘Don Juan in Soho’ and a historically accurate operatic version based on Moliere’s ‘Don Juan’.

We started with the operatic version which we set in the 17th century; I used the University library more than every for my research, it holds a treasure trove of essential information on costume history and also the history of opera. I think the biggest challenge for me was to create costumes which would fit the period and allow the dancers to move freely whilst portraying the characters. 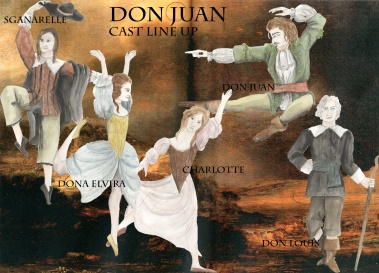 I love the colour palettes I used for the characters, taken from the painting (seen in the background) by Remebrandt from the Age of Enlightment, the movement of new thought and theories which I chose to set the opera in – the most exciting, innovative and enlightening period in history which I have researched. The dark, dirty colours reflect the grim realism of Moliere’s script.

We then moved on to Marber’s modernised script and I the internet was invaluable in informing me about current fashion trends and designers. I used the same characters as I did for my first version so that the differences but also similarities can clearly be seen. One of the exciting aspects of this project was that we could chose a directing style to help us design a realistic film production; I chose Quentin Tarantino as the script is gritty and gripping, indeed I thought the dark and honest style of Tarantino would fit in perfectly with my idea for the new film – I moved the Soho setting to New York or Chicago due to the similarities between the characters and ‘gangster’ families (like in the Godfather films) really hit me and sparked my imagination when reading the script.

I decided to create a new background for the characters –  the family had to leave Italy due to friction between a rival ‘mobster’ family and move to America, where they had relatives to help them build a new life. I wanted the Catholic belief of Don Louis to be put to the test by seeing his son fall in love with consumerism and materialism of western society leading the protagonist to neglect his family duties and honour. 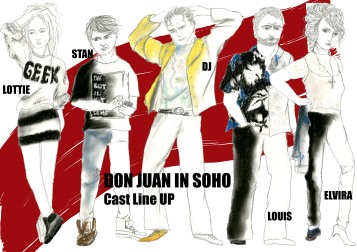 it very well together, the subtle, dulled colours and different styles show the character’s individual personalities. I am very pleased with the outcome of my work and think I was able to achieve an essence of Tarantino’s style and work to the brief which allowed my imagination to lead my designs.

This project also showed me different ways of researching and designing; I now feel I have developed and improved the way I work through the design process and time management. Indeed, I have discovered an alternative illustration style which adds more character and movement into my designs.