I wanted to include some of the other things I have made of the years spent in secondary school, especially this one because I really enjoyed making it!

I was attempting to link historic costumes in with stage costumes – thereby splitting the costume down into removable items (jacket, skirt, dress) which could be worn all together or mismatched on stage creating a strange historical costume! Bit of a random idea for a project but it was so much fun!

I took the pattern from Janet Arnold’s book ‘Patterns of Fashion 2’ – which I then had to scale up and adjust to fit me, as I want to wear it! It was a long process but one which I learnt a lot from; and where I think my love of historical costumes blossomed. 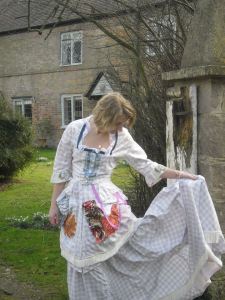 In the grounds of Avebury Manor; jacket, skirt and dress.

Once I had constructed my final outfit I photographed it at Avebury Manor, a quiet and picturesque setting, and created a short video so that the dress could be seen in motion and to portray the full effects for the costume. It turned out quite well and I had a lot of fun making it (on a mini family holiday in Killerton at the Burrow Farmhouse B&B, and it was the perfect setting!) 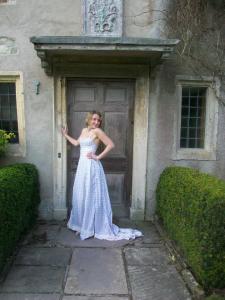